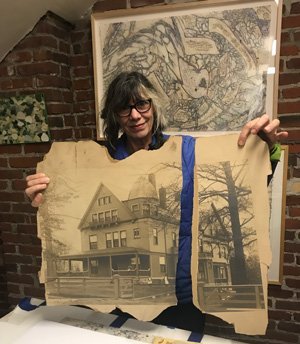 A fixture of the Columbus art scene for decades, Mary Jo Bole has unearthed and explored fascinating bits of local history through a wide variety of mediums. For her newest work, she’s delved into a connection between her family and the Carnegies, the Pittsburgh family that made its name in the steel industry. She’s also trying on a new medium for her: video. Mary Jo took a break from her work on the project with the Wexner Center Film/Video Studio Program, which offers full-time post-production assistance to filmmakers from Ohio and around the world, to answer some questions from Melissa Starker, the Wex’s Creative Content and PR Manager. The Wex also supports in-state filmmakers through the annual showcase Ohio Shorts, happening Saturday, April 28.

Melissa: How would you describe the focus of your work as an artist?
Mary: I’ve made art over these 40 years that has tried to reconcile the weight of family possessions and history, twisted with the punk and counterculture I grew up with. I visit cemeteries wherever I go. We grew up around Lakeview Cemetery in Cleveland. It was our shortcut to the bakery and where we walked our dog, climbed the trees and visited buried ancestors. (I’ve always known about more dead family than the few I got to know in life!)

I’m a product of the leftover Victorian culture I experienced in an equally fading Cleveland. I’ve looked for the underbelly in the places I’ve lived — Cleveland and Columbus, Kaunas and Vilnius, Lithuania, Den Bosch and Nijmegen, The Netherlands — as well as in their cemeteries. In Western cemeteries, I’ve seen the futile attempt to extend our “I was here,” through monuments made of geologic materials like stone, clay, metal and glass. Witness the impermanence of permanence, though, as the ground heaves or the young vandals do their work knocking them over.

I have tried versions of these ideas in prints, ceramics, sculpture, books, drawings and installations. I’m sure my material choices have been guided by living in proximity to the rust belt. It’s the clay and water belt, too. I’ve gravitated towards earthly materials and processes. It has been important for me to be near to industries and to find makeshift ways of working in industries, like sewer pipe plants, brick factories, monument plaque companies or silicon carbide bulletproof vest manufacturers. In the drawings and prints, too, I use geologic processes and materials that are permeable and leech and fume.

Melissa: What are you working on now with the Wex’s Film/Video Studio?
Mary: I am two years into making a video documentary and I think it will be called Family White Elephants, like the wallpaper and artist book that preceded it. It is in part a summation, to cope with an extensive family archive and the artwork that comes from it. Through interviews and tracing back a family kinship to the Carnegie play land on Cumberland Island, I’ve uncovered unexpected ways in which these relatives endure.

Melissa: How long have you been researching this project?
Mary: I can’t think of a time when this family history hasn’t been a part of my life and work. We started going through granny’s trunk periodically and hearing the stories when we were little kids, and continued until a few years ago when the trunk finally rotted away. A good deal of the paper and photographs resided in there, as well as clothing like the “widow’s weeds,” as great granny Mattie’s mourning clothing was called. We lived with many other emblems of granny Bole’s life, along with the unmarked porcelain white elephant, a possession that my great grans Mattie and Fred Ely got as a wedding present in the 1860s. We see it go through time in some pictures while the people come, then go.

Melissa: Film and video is a fairly new medium for you. What made you decide to give it a try?
Mary: Actually, it just welled up in me on the last night of the exhibit of Family White Elephant at CCAD’s Beeler Gallery. The piece lived for a couple of months yet was handmade over a couple years. I realized I’d been duped by my own making into caring about the longevity of ephemeral, hand-wrought paper. Film/video seemed like a possible new approach, trying to glue or trap together under one roof a story I seem to keep trying to tell.

Melissa: What’s your favorite thing to do in the city when you get some downtime?
Mary: FRIENDS! I also love biking to do my errands. It is one of the most freeing things I do.

There’s picnicking at the pet cemetery near the airport, and a visit to the 1920s super-Deco, early airport terminal nearby. (You can see casket-like time capsules displayed in cases somewhere in the current terminal.) Visiting the Shrum mound and looking out to the other mound in the water; in the summer a huge snowy egret rookery sits out there (if you go, remember the binoculars).

There is so much great music in town. Also the rather secret Columbus Mental Hospital Cemetery, Green Lawn cemetery, any nearby cemetery; the back room tour of the Billy Ireland Cartoon library; the Library of Ohio; The Ohioana library; The Ohio Historical Society and library; and Orton Hall at OSU (constructed out of rock according to geologic age!).

More obscure destinations include Franklinton’s Jubilee Museum and Hilliard’s Early Television Museum. A tour at the Jackson Pike Sewage Treatment Plant is not one you’ll soon forget. There’s also the Trap museum in Galloway and Canal Winchester’s Doll and Toy Museum (sadly, The National Barber Museum is closed due to smoke damage from a fire).

There are other places in a book I made, Combing Columbus—or at least places that were around six years ago. It was part of Finding Time: Columbus Public Art 2012, an exhibition for the city’s bicentennial. There’s a copy at another place on my list: the history department at the main Columbus Metropolitan Library.

Columbus Makes Art Presents is a bi-weekly column brought to you by the Greater Columbus Arts Council – supporting art and advancing culture in Columbus. The column is a project of the Art Makes Columbus campaign, telling the inspiring stories of the people and organizations who create Columbus art and sharing information about exhibitions, performances, concerts and more at ColumbusMakesArt.com. Each column will be written by a different local arts organization to give you an insiders look at how #artmakescbus.

Columbus Alive’s Best Artist of 2018
Us